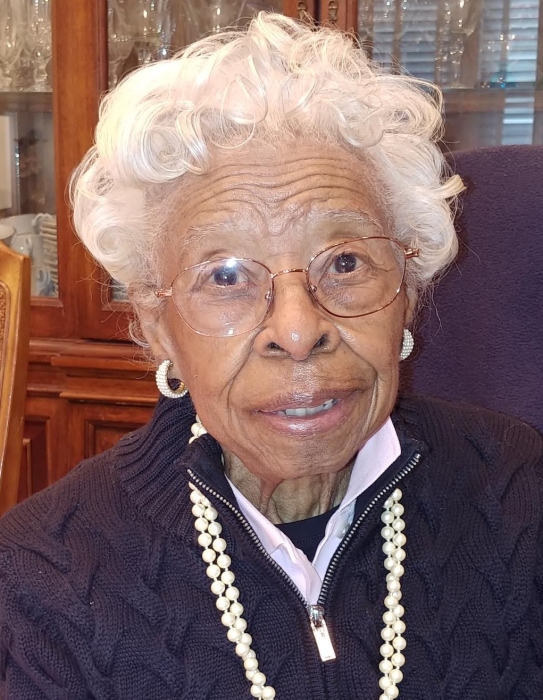 On November 5, 1929 Lolia Tilghman Thomas started her journey and legacy on this earth and transitioned on July 24, 2021 at the age of 91.  She was born in Princess Anne, Maryland to the late Edward Tilghman and the late Ola Jones Tilghman as the oldest of four sisters.

Lolia attended schools in Montgomery County, Pennsylvania graduating from Lower Moreland High School in Huntingdon Valley, Pennsylvania in 1947 where she excelled academically.  In September of the same year, she began matriculating at the then named Delaware State College that has now become Delaware State University, to pursue a degree in English.  Lolia was enamored with knowing and understanding, not only the English language, but French as well becoming a member of the French club at Delaware State University.

Upon her arrival as a freshman at Delaware State College, she met Nathan O. Thomas who offered to carry her bags to the dormitory and the rest is history. She and Nathan married on March 24, 1951 and to this union were born three children. Married life was full of adventure. Their time together was filled with caring and nurturing their three children with enriching experiences, taking road trips across the country and up and down the East Coast. Many Saturdays and weekends were devoted to attending many, if not all, Alumni affairs at Delaware State University.  You would always see Lolia with Nathan in their box at the football games and every Homecoming, dressed to the nines at the alumni galas or the Presidential balls and sharing great laughs with long time college friends. Lolia was always smiling and gracious in her interactions with everyone that she met.

After the last child was born and off to school, Lolia started a career at the Social Security Administration excelling in leadership as a manager for 30 years before her retirement.

Lolia also demonstrated her skillful excellence in the positions that she assumed in a few organizations that she enjoyed.  She was Secretary for the local Philadelphia Chapter of Delaware State University for 24 years and Secretary for the Oriole Historical Society for twelve years in helping to preserve the church built by her great-grandfather in Oriole, MD.

Lolia had a quiet and gracious demeanor but embodied a strong love for and spiritual relationship with the Lord Jesus Christ whom she accepted at an early age.  She faithfully followed God's word, and was a life-long member at Janes Memorial United Methodist Church.  She enjoyed being a member of the United Methodist Women, attending conferences and Bible study.  Often times, when Lolia was at home, quietly tending to her chores, you could hear her humming her favorite hymns!

One of the most cherished positions that she held was being a Quette (wife of an Omega man) supporting Nathan in his love for the Omega Psi Phi Fraternity, Inc.  She served as President of the Quettes in the Mu Omega Chapter in Philadelphia helping to support the fraternities' endeavors.  She traveled with Nathan to a variety of states for the fraternities' conclaves and regional conferences. The Omega men were always delighted to greet Nathan and Lolia and spend great times in the fraternity activities.

Lolia, lastly had a love of her family, especially for her sisters, followed by her love for all of the grand and great-granddaughters that she has. She would make sure that when the granddaughters would spend time in the summer that they would have fun-filled days. She was the "Nana" that they adored.  She helped to organize family reunions and celebrations. You would also find her planning with great detail and cooking wonderful, delicious meals.  She was the "hostess par excellance"!

Plant a tree in memory of Lolia by clicking here.
To send flowers to Lolia's family, please visit our floral store.

Plant a tree in memory of Lolia
An environmentally-friendly option

Plant a tree in memory of Lolia

4 trees planted in memory of Lolia

With loving memories of Mom, Mrs T. and Nana. Ronald (son-in-law), Nathania (daughter) and Natalie (granddaughter) Johnson will miss you dearly, but we will see you again in eternity.


A Grove of 3 Memorial Trees was planted in memory of Lolia T. Thomas

A Memorial Tree was planted for Lolia T. Thomas

We are deeply sorry for your loss ~ the staff at Bruce R. Hawkins Funeral Home
Join in honoring their life - plant a memorial tree

Plant a tree in memory of Lolia